keep your secrets – the lockdown sessions

A few weeks ago we played some (semi) acoustic songs for DaFestival, an online showcase organized by DaMusic.be.

THE RG’s are supporting mondo generator!

Really proud to add this show! Longtime-survivor Nick Oliveri is coming back with his band MONDO GENERATOR to tour around Europe. THE RG’s are supporting them at their Belgian clubshow on the 13th of March, 2020 at the 4AD Diksmuide!

Feel free to tune in and have a look and listen! Don’t forget to like it and don’t hesitate to share it with your friends! Support is always highly appreciated…

The last couple of months we received a lot of great reviews!

Check this one out from Moshville Times UK:
ALBUM REVIEW: THE RG’S – THE CRICKET SOUND

I’m not going to lie, this one caught my eye in our big review pile mainly because of the band name literally being my initials. Of course, it helps that they actually sound like an interesting listen. With a big emphasis on grooves injected into their hard rock, they add in hints of grunge and punk to give it a raw, fuzzy sound.

As the long intro to opening track, “Bored Ass Tony”, continues, you begin to think they’re an instrumental band, leaving the instruments to portray the angst. And just as you’re getting used to the idea, the raw, snarling vocals kick in. It’s feral but reminiscent of early Queens of the Stone Age with its psychedelic moments. Elsewhere, title track, “The Cricket Sound” and “Keep Your Secrets” sound like Foo Fighters at their most pissed off.

Whilst “All Day” sounds more like Queens of the Stone Age on acid, it’s also where they wander into Them Crooked Vultures territory. Indeed, it’s no wonder they label themselves as stoner rock. However, there’s plenty of vicious moments such as “Stevie, The Guy Who Didn’t Pay Us”. It’s laden with anger as vocalist Wouter spits out his lyrics, you have to imagine it’s autobiographical. Between that and the layers of fuzz and grime on “Dead Inside”, it shows the band know how to be aggressive among their more serene moments and are just as skilled at both.

However, it’s the last couple of songs where the band shines best. “My Friend Ed” and “Smack Your Neighbour” run seamlessly into each other to make you think it’s one track bordering on the 14-minute mark. However, between the pair of them, they bring everything which has came before on the album and condensed it into these final two songs like a double-barrelled shotgun blast.

The Cricket Sound is a great album to lose yourself in. As the band draw from so many diverse sounds, they mould it into one cohesive sound to make it theirs. The brief dalliances into some of the more unwieldy rock genres ensures they’ve got their own spin on what a rock album can be. Add in the fact it’s by a trio who a clearly comfortable working with each other and you’re on to a winner.

Music Is My Radar posted this one:

THE RG’S – THE CRICKET SOUND

Hailing from Belgium, The RG’s are a Rock band with Grunge, Stoner and slightly Proggy elements. The Cricket Sound is their second album and was recorded at the Number Nine Studios in Ghent and produced by Brent Vanneste from Steak Number Eight.
The intriguingly named Bored Ass Tony starts us off with a Kyuss-like riff over some quite Prog chords. The pace soon increases though and it turns into a pounding Rock song. Wouter Vandaele’s vocals on this track are reminiscent of Josh Homme. The song itself is melodic Hard Rock with a slight edge, similar to The Foo Fighters. Stevie, The Guy Who Didn’t Pay Us (another strong title) careers along punkishly with some wailing guitar from Vandaele before settling into a Grungy verse. The arrangement jumps around quite a bit between riff, verse and a strangely Psychy ending. The title track is next. It’s another pounder with Vandaele sounding closer to Layne Staley. There are some pretty strong riffs on this one and it turns out to be a bit of a belter. Dirty Allan (their acquaintances seem to be coming in for a lot of stick) continues the Stoner/Grunge feel of the title track. There are some nice, high, backing vocals on this but a slightly meandering arrangement stops it from being a total banger. All Day starts like Power Pop with a stop-start riff. The verse is pretty solid but the bridge and chorus let it down a bit. Fortunately, Keep Your Secrets storms in with some swooping bass from Jens Vanhee. The blend of song, arrangement and sound is better on this track. A good indication of what they can do when they tighten up the arrangements a bit. Dead Inside starts with a 70s Hard Rock riff. The band’s playing is tight with Stijn Decoene driving it on the drums. The song itself reminds me of Alice In Chains and is pretty good apart from a slightly Proggish break in the middle which is mercifully replaced by some Wah-wah aggression. My Friend Ed turns out to be a strong song, if a little over-long at seven minutes. The chorus reminds me of Electric Wizard but this is possibly unintentional. The last song is Smack Your Neighbour. It is a little more subdued but still has a strong riff and some intricate guitar lines. The song drifts a little as a slower section with keyboards appears and, again, there is the feeling that it is a good tune but a little long.
A well-written, well-played and well-produced album, The Cricket Sound crashes around somewhere between Grunge, Melodic Hard Rock and something a bit more tricky and technical. I personally prefer them on the Grungier songs like the title track and I don’t always enjoy the twists and turns in the arrangements. It comes down to personal preference but I feel that The RG’s have a pretty solid Stoner/Grunge album in them if the arrangements were tightened up. But, it’s still a good effort…

Proud to announce that HEADACHE MUSIC AGENCY is collaborating with some venues to organize so called HEADACHE NIGHTS together with our friends from Quails!

Already announced:
The collaboration between H.M.A. and Manjerock Zwevegem on the 10th of November!  We’ll be playing that rad festival together with Quails, Tangled Horns (RuffStuffMusic), etc… 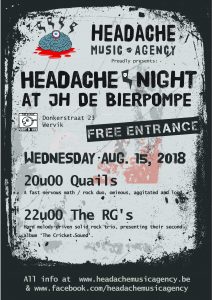 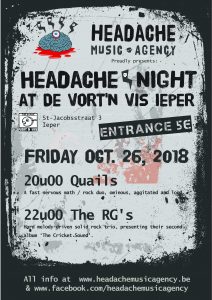 JEZUS FACTORY RECORDS JUST LAUNCED OUR RECORD “THE CRICKET SOUND” IN THE U.K.!!

Some info about J.F.R.:
The Jezus Factory was formed in 2006 and is an independent UK record label that specializes in Belgian and particularly Antwerp music; although we also release the better Dutch and UK bands.
We distribute releases for other good independent labels such as Heavenhotel, Starman and Audio Antihero.

Feel free to check them out and give them a like!

We are very glad to announce that we got our complete merchandise online!!
Feel free to order our newest record on CD or LP, our first album on CD and some of our shirts!

Headache Music Agency on the move!!

Our agency (H.M.A) will soon reveal some shows ft. Quails on several stages!  We’re really excited about this new adventure!  The shows will be planned in August, October, November and December!

You want to know more about Headache Music Agency?

The LP-version of “THE CRICKET SOUND” has landed!!
Feel free to order your copy!
It will be presented on Thursday the 14th of June at Cafe De Giraf Vlasmarkt in Ghent.

We just uploaded a first brand-new song on YouTube!! It’s called ‘THE CRICKET SOUND’ and you can check it right here:

With special thx to: